Rescheduled after the “Beast from the East” disrupted the original date, The Urban Voodoo Machine returned to The Castle & Falcon supported by Harry Jordan.

Harry Jordan opened proceedings. The first thing you notice about Harry Jordan is that she has presence, bags of it. 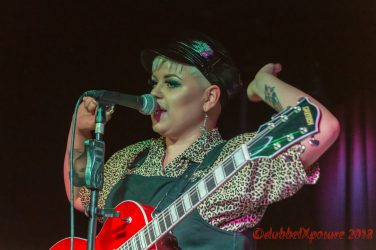 Even before the band plays a note, there is this unspoken demand to look at the band and pay attention. Once the band start playing, it is very hard not to. The band are tight, and Harry’s voice has a richness and a power that pleases and suits the country Blues/rockabilly that the band deliver so well. “Hell in High Heels” “Wild Wild West” and “Magic 8 Ball” (A song about indecision) were they highlights for me along with a sumptuous cover of Big Mama Thornton’s “Hound Dog” to close the set.

The Urban Voodoo Machine came on in typical fashion, a slow march through the crowd on to the stage before kicking straight into the “Theme”, probably one of the most exciting and powerful set-openers anywhere. The Set-list tonight drew heavily from the latest album “15 Shots From the Urban Voodoo Machine” , an anthology of all their singles from the last fifteen years. “Fallen Heroes”, a tribute to sadly departed members Robb “The Kid” Skipper and Nick Marsh, had the crowd stamping and clapping along in memory of the fallen. “Train Wreck Blues” is as close to a straight 12 bar as the band get but watching  Paul-Ronney Angel you can see that he feels every goddamn word of it. Mind you, the same can be said for every song the 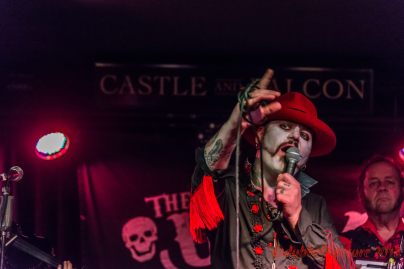 y perform. Every song, every lyric, you feel the punch of the words, from the bleak and hopeless lives in “Baby’s turning Blue” to the troubled child in “Orphans Lament” But while each song may be about the troubles of life, they are all delivered in a way that gets you clapping, grooving and smiling at the same time, no more so than on “Crazy Maria” Latin Beats get the feet and hips swaying while telling a tale of the suspicious death of an elderly neighbour. Set Closer “Goodbye to another Year” had the crowd bouncing as it always does. They encored with a cover of Nick Marsh’s “Destiny Angel” before sending everyone home with the best love song in the world “Love Song 666” ringing in their ears. Once again, another fine evening in the company of the Urban Voodoo Machine, A band that simply always deliver. 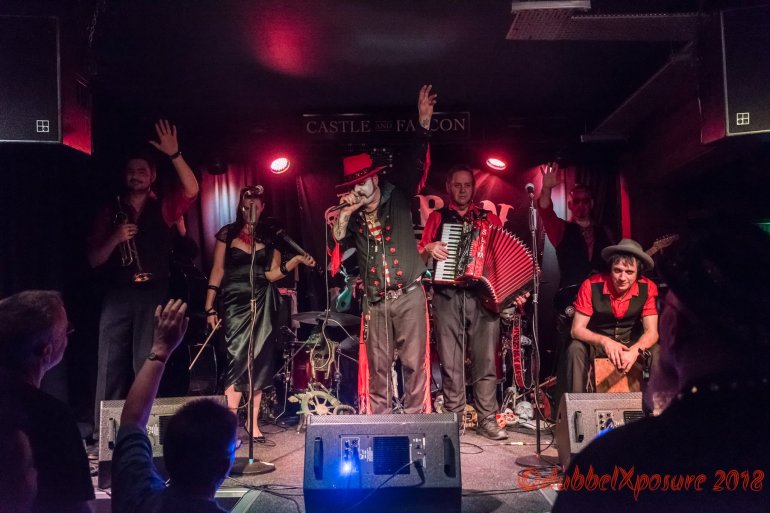